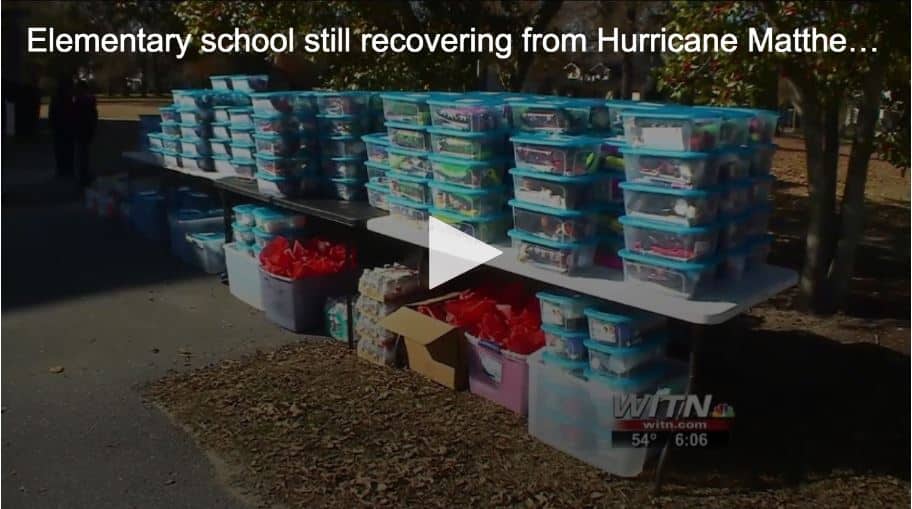 Though it’s been a year since Hurricane Matthew, 75-percent of one local school’s population remains homeless and displaced.

Even the school building was condemned and children moved to a different school in a nearby town.

On Thursday, Princeville Elementary School students in Edgecombe County got an early Christmas.

Floodwaters inundated the school back in 2016 for the second time in less than 20 years.

“The morale was so low, and school is the safe place for children and I know for Princeville Elementary, their school means even more,” says Marca Hamm, the executive director.

“Some people say it was a school, it wasn’t your house, but it took a big piece out of us,” says Principal Annette Walker.

While it’s been more than a year, these students and their families continue to rebuild.

“Our house got flooded and it was just on the news everywhere,” remembers Keonna Powell, a fourth grader at the school.

“Yes we had a flood, but nothing happened to the inside, it was just outside and yeah, we’re still in the house,” says Aileen Caberra-Segura, another one of the school’s fourth graders.

Powell’s family wasn’t able to stay. “We moved somewhere else.”

Thursday afternoon, an early Christmas surprise of 176 boxes filled with goodies for each child and 44 gift boxes for teachers and staff from the North Carolina Foundation for Public School Children.

“Not only are we giving them a check to help replenish their classrooms, after finding out the need was so great among their children, we went a step above,” Hamm says.

For Principal Walker, it’s a flood of emotions and gratitude. “It’s so touching to know that people still have us in their minds and their families and trying to meet those needs, especially at Christmas time when the season is all about giving.”

The foundation says they usually help teachers and students with anything, even eyeglasses, clothing and school supplies, but this is one of their largest.

PrevPreviousYou Came Through With The Backpacks!
NextPrinceville Prepares to go Back HomeNext